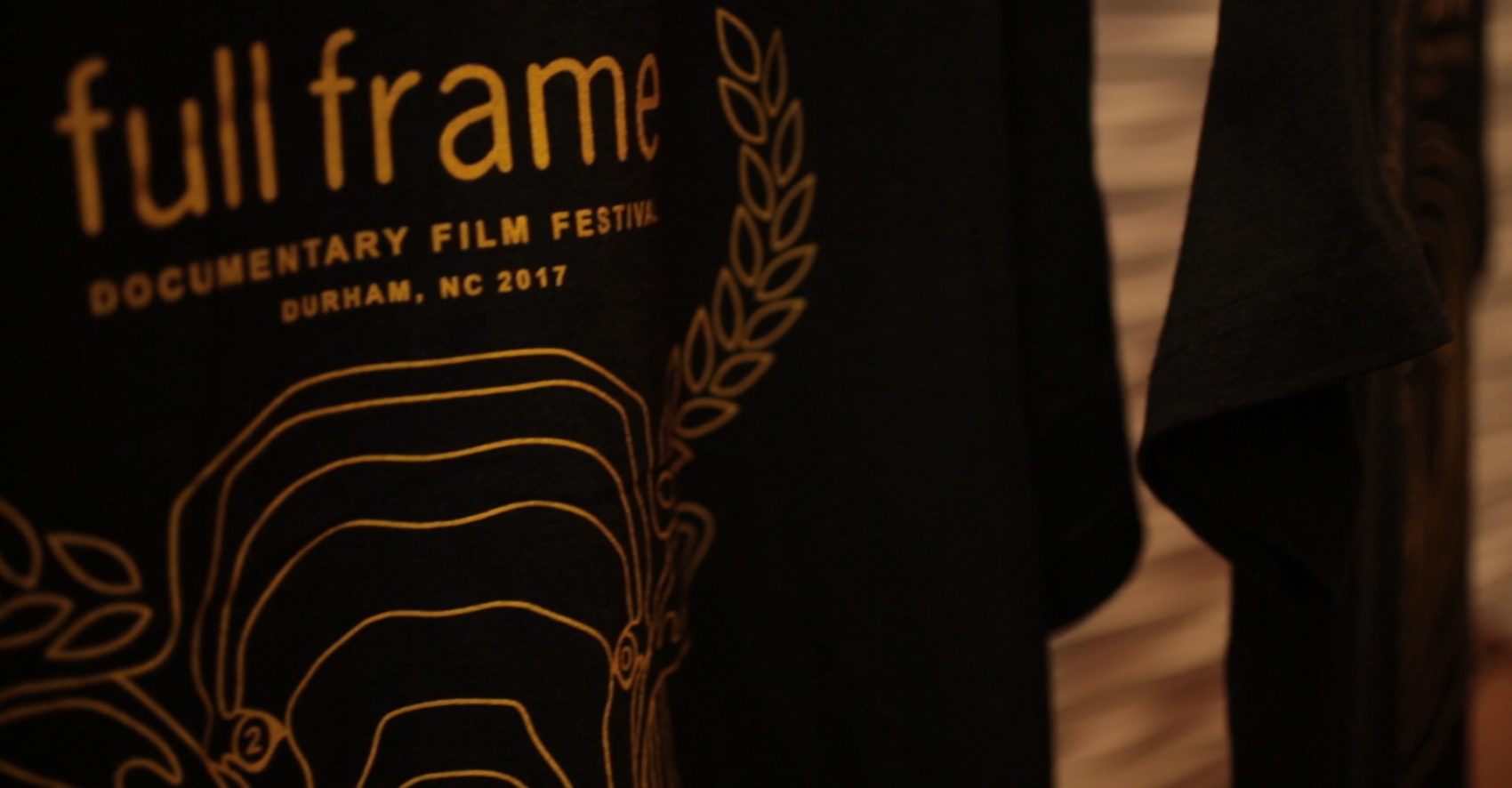 As all corners of the documentary field converged onto our city in April, we found ourselves curious about who’s (already) here. Who makes Full Frame possible? Who’s coming, or even screening a film, from North Carolina? Who in Durham loves the power of story, too? We set out to meet our neighbors – and needless to say, we were blown away by the curiosity all around us. From volunteers to students to filmmakers, we hope you enjoy this mosaic of the festival community right here in Durham!

Know someone in the #FFportraits gallery? Want to share how you #fullframefest? Join the conversation on Instagram, Twitter, and Facebook. If you haven’t already, check out our Reel Durham video portrait of the festival to learn why we love documentary! Victoria Bouloubasis & Pilar Timpane are local filmmakers, currently collaborating on "The Last Partera," a film about Costa Rican midwives fighting for the right to their own healthcare choices.

"Every film has a wonderful character, or group of characters, at the center of the story. Full Frame is really helping us think about how to create character-driven narratives in our film & draw empathy from our audience." Marcus Bryant is a Durham native working concessions at his first Full Frame. In 2013, he participated in a joint production between Student U and the Full Frame School of Doc, a free summer filmmaking camp for high school students in Durham.

"I was in this program called Student U. We did a Full Frame documentary on different restaurants in Durham. It was a lot of underground restaurants that you wouldn't really know of. ... I was the microphone man. It was pretty cool!" Mollie Moses has worked at the Carolina Theatre for many years, with an even longer family history.

In 1978, her parents helped save the theater from demolition. An avid storyteller & lover of theater, her father once spent Christmas Eve repairing the heating system just in time for holiday showings! On your next visit, be sure to stop by the Connie Moses Ballroom, named in honor of her mother's leadership in the venue's preservation & renovation.

A big thank you to the Moses family! Luke Hicks is from Austin, Texas and attends Duke University, where he studies film and ethics from a theological perspective.

“I think filmmaking gives you the opportunity to be up and close, like face-to-face with someone, to hear their story.” Chapel Hill filmmaker Olympia Stone screened her short doc "The Original Richard McMahan," a genuine portrait of a miniature artist who connects us with artists across millennia.

"I went down this long road thinking I was making a film about an art savant, and then I found out that Richard had never been formally diagnosed. He doesn’t self-identify that way. It would not have been the right decision for me to force this narrative to make the movie I wanted to make. So it’s figuring out the line between not wanting to be exploitative of his trust, but wanting people to know enough about him to understand. You just want to make sure you do right by them." "I was shaking. 'Abacus' was so personal because it was a Chinese-American family. I saw my dad in the dad. I saw my mom in the mom. It was just so crazy to see an Asian family portrayed on a documentary screen in such a brutally honest way. It’s not stereotypical or typecasting. It’s just their honest lives. It’s so, so amazing to see them fight for their own rights!” Between the two of them, Pete Goldberg and Susan Cohen have been in Durham for more than 60 years. This is their third year volunteering for Full Frame. Born and raised in Durham, Allen Williams enjoys exploring his imagination through screenplay, poetry, and songwriting.

“Full Frame brings new life to the city. It’s like a beating heart. It’s not what I remember of Durham. I think Durham made me a tougher person. But, it also brought out my creative side. I’m proud to be an out-of-the-box thinker, proud to be who I am, and I’m blessed.” Durham filmmaker Nicole Triche screened "All Skate, Everybody Skate," a timeless window on Miss Doris, the septuagenarian owner of a roller-skating rink in Topsail Island, NC.

"Documentaries can make us laugh, make us cry, but hopefully they really make us think, make us more curious. I was curious about Miss Doris, and so in the process I learned what it's like to be a woman in her late 70s, working 7 days a week, at 2 different jobs, and really owning it!" "My favorite documentary is 'Salesman.' It's so real and immediate. It takes you back to 1966, and those men... You really feel their desperation and need to sell their Bibles. So documentary absolutely has the potential to affect great change and open people's eyes. Documentaries risk preaching to the converted, but they can always start conversations." Katherine Neer is from Chapel Hill and has been coming to Full Frame for several years.

“We’re just not exposed to as much of the world as we’d like to be. And for me, as an older person coming, it’s like being a student again...learning about things that I would normally never have a window into.” "I always joke that it's summer camp in April because I only see these people once a year at Full Frame. But every year we pick up like it's only been a week, and just...the camaraderie!" 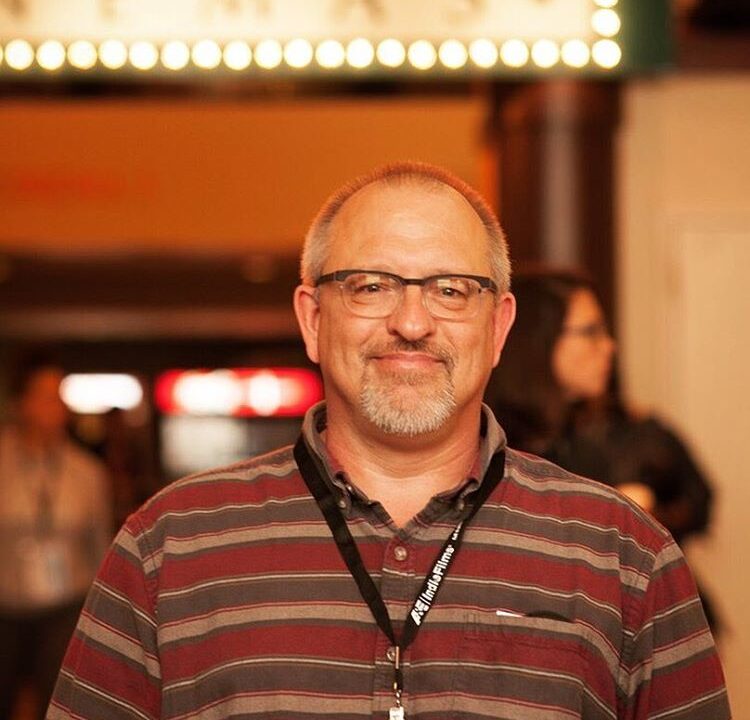 Jeff Neer has been coming to Full Frame on and off for over 8 years. As a social worker, Jeff pays close attention to social justice issues.

“The great thing about documentaries is they help show you that different perspective, so you can see other people’s viewpoints.” "We have a pretty nice dance that's second nature now. There's lots of inside jokes and laughter, wedged in around crazy work schedules! At Full Frame, we had that same sort of goofy bond with other volunteers. There we all were, at the last job of the whole festival, and another volunteer pulled us into her maniacal goal of finishing this immense heap of amazing Carolina Theatre popcorn. We ended up roping other photographers - and even some late-arriving guests - into the quest. Silly good times!" "Full Frame is bringing stories from all over the world that you would never have exposure to in a very intimate and emotionally driven way." Cameron Spann is a local filmmaker. He volunteered on the photography team at his first Full Frame.

"My inspiration comes from my dreams. I produce sound sometimes, and then I develop a film over the sound. It's more experimental, like just a feeling. I put it out for people to use their imaginations and get whatever they get from it. So it's like free expression and 'free intake' expression." Claire Collins is a photo & video journalism student at the University of North Carolina.

"My last few projects are about people with disabilities, who also have alternate realities where they are some kind of superhero. It's fascinating to me the way that people think of their own narratives and identities, and how that relates to their physical existence and the way other people perceive them."

This week, you’ll hear from Adrian Gilliam, our spring intern. A gregarious graduate of the communications program at UNC, Adrian tested out his gift of gab on the festival landscape!

I recently had the privilege of attending the Full Frame Documentary Film Festival alongside StoryDriven. Oh, I should probably introduce myself! I’m Adrian, the new intern. This was my first outing as part of the StoryDriven team, so it was mostly a gauntlet of firsts that I had to run. That being said, my nerves didn’t get in the way of me enjoying the experience!

Elliot and I set out together to profile the people of Full Frame as a tag team. He would interview the folks we met about Full Frame, and I would record the interviews and photograph portraits of them. This was the first time I had ever done man-on-the-street-style interviews, and I learned a lot about approaching and interviewing strangers from watching Elliot. A good strategy, I found, was to approach people and start up a conversation for at least a few minutes before asking someone if they’d like to do an interview. Asking people cold was too intimidating, and folks would often say no reflexively because they felt uncomfortable talking to a stranger, let alone on camera. As someone who is anxious about interacting with strangers, what I took away from watching Elliot approach people about interviews was, after a few minutes of chatting off-camera, neither of you feel like total strangers anymore, and people would be more likely to agree to an interview and be more comfortable doing it.

I noticed fairly quickly that the scope of the kinds of people who were affected by Full Frame was wider than I anticipated. It was really fascinating to be able to talk to attendees and find out how the documentary form impacted them and why they enjoyed the films. The current that ran through the majority of responses was that the festival made them feel connected to others: through attending screenings together, going to talkbacks with directors, and at the heart of it all, seeing the authentic stories of others and learning that we as people are often more connected than we seem. The people working the festival as volunteers or employees remarked on the positive impact the festival had on the Durham community. They recognized that it was the coming together of people to share their stories and learn about one another and people in places they may never see that was at the heart of it all. As one festival-goer, Katherine Neer, put it:

“One of my favorite things about this film festival is you get people of all ages and stages of their lives, that come together for four days and watch these amazing documentaries. And then, in the moments in between the documentaries, you have these awesome conversations with people you would have never met before, with all different kinds of backgrounds and perspectives, coming together and commenting and sharing their thoughts. So, it’s kinda cool!”

More than just how to conduct field interviews, I learned that our desire to feel connected to others and build empathy is at the heart of the documentary as a form.

Oh, and I got to take pictures, which was pretty fun!

How do you start conversations? Tell us what works for you – and what doesn’t!